In Colombia, finally some good news about women’s soccer The Colombia women’s national football team have been on a steady climb up the FIFA rankings since 2008, is currently ranked 24th in the world, and is the second-best in CONMEBOL, with only Brazil’s talent squad sitting higher. The U20 team secured 4th place at the 2010 World Cup, and last year, in Canada, reached the Round of 16. Their ultimate 14th place finish in the 2015 World Cup is the best ever for las cafeteras. How has Colombia achieved so much, particularly in a region where there is little to no support for women’s football?

Women’s football in Colombia, just like in most countries throughout the world, has had to overcome unique adversities and challenges to gain support from private and public entities – as well as from fans. Like too many other countries, economic support is minimal, and Colombia’s lack of a professional league has made it all the more difficult. Yet somehow, they’re still managing to improve.

When players like Ingrid Vidal, prior team captain Yoreli Rincón and current captain Natalia Gaitán first joined the national team in 2007, the country was embarking on its first ever U-17 South American Women’s Football Championship. Colombia took the tournament (the first of its kind) seriously, preparing for it six months before it began, while others in the region participated only due to the fact that their FAs would receive a fine if they didn’t. With such an imbalance in preparation, no wonder Colombia was crowned as the best U-17 team in the region, securing a spot in the U-17 World Cup in 2008.

Preparations weren’t confined to the pitch, however. These young players were still in school, so the Colombian FA made an effort to provide private academic lessons, which included the English language. This allowed the players to not only graduate from high school but to earn university scholarships in the USA and to explore options with European football clubs. Gaitán plays for Valencia CF in Spain’s first division, after a season with the Houston Aces in WSPL. Rincón, who previously played for Malmo and the New Jersey Wildcats, will join Patriotas for the first season of Colombia’s professional women’s league.

That generation has opened the paths for future players, and the FA still encourages their players to explore further options abroad (although this may change in coming years). Meanwhile, players from other countries in the region have had to sacrifice their studies in order to be able to play football. In countries like Ecuador, it is common for female football players to not graduate from high school, which means their opportunities both on and off the pitch become limited.

The success of the U-17 squad prompted Colombia to host the next U-20 South American Women’s Championship. The 2010 tournament proved to be a turning point. It was the first time the country hosted a major international women’s football event and, while the women had already been to the U-17 World Cup, it wasn’t until they played in front of home crowds that the public really gained interest in the women’s game and its players. Colombia took second place, this time earning themselves a spot in the U-20 World Cup.

Five years later, Colombia hosted the 7th edition of the women’s Copa Libertadores – the only country other than Brazil to host the tournament. Catalina Usme, the top scorer, managed eight goals despite her team, Formas Íntimas, failing to make it past the group stage. Fans continued to pay attention, but perhaps more importantly so did those with money. The men’s Copa Libertadores is extremely popular, and now investors were noticing the women’s tournament.

Despite the recent boosts to the women’s game in Colombia, there had never been a professional or official league in the country. But that’s about to change.

Colombia’s senior team has been to the 2015 World Cup, the 2015 Pan-American Games and the 2016 Olympics. In the Pan-American Games, Colombia finished second, losing 4-0 to Brazil in the final. In Rio, Colombia didn’t make it past the group stage, but they managed a draw against the US national team.

Usme was the hero of that game, scoring two incredible goals that reminded many of those watching of the free kicks David Beckham used to put in for England. The first went straight through Hope Solo’s legs, while the second flew over the goalkeeper’s hands and directly into the back post. The golazos not only secured a draw for Colombia but blotted out Solo’s clean sheet, something neither New Zealand nor France were able to do.

Olympic captain Gaitán stated in a post-match interview, “this shows we can challenge big teams – such as the USA – but we need continuity, friendly matches, a process, as well as more and better support from the FA.” Hopefully that will come. The draw gave the players confidence in their abilities and the team’s potential, brought attention from the media, and reinforced the decision to create a professional women’s league in Colombia.

The league is set to begin in early 2017. Dimayor, responsible for regulating professional football in Colombia, aims to cover most of the league’s expenses through sponsorships, including that of Colombian airline Avianca. FIFA defines a professional player as one with “a written contract with a club and is paid more for his footballing activity than the expenses he/she effectively incurs.”   The definition is geared toward men, but Dimayor hope to cover enough expenses so that clubs will only need to pay players’ wages, making it a truly professional league.

Dimayor is encouraging the interest of professional male clubs and encouraging them register their own women’s club. The league already has 21 clubs confirmed (more than the men’s tournament) from all over the country.

The league champion will earn a spot in the Copa Libertadores and the opportunity to play against the winner of the Spanish Primera División. Colombia have not forgotten the importance of education, either: Every player on the winning team will receive a scholarship to Sergio Arboleda University in Bogota.

The efforts FIFA, CONMEBOL, the Colombia FA and Dimayor are making to develop women’s football in Colombia are remarkable. In less than a decade, Colombia has become a leader and an example to other South American countries when it comes to women’s football. To top it all off, the country has officially announced they will be presenting a bid to host the 2023 Women’s World Cup.

The future looks bright. Despite not taking the obvious path, of creating a league first, Colombia have managed to achieve success. The players were, and continue to be, determined and perseverant in their passions and love for the game. The success of those players, along with the creation of a professional league, will hopefully inspire other countries to follow their example in supporting and believing in women’s football. 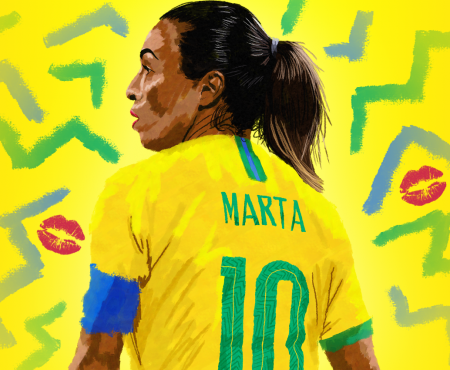 Don’t Take the Red Lipstick Off Portugal were once so good, they helped create the best World Cup side ever…Brazil 1970 Uruguay, the gritty little sibling to Argentina, has a point to prove

Peru are out, but the unity Paolo Guerrero created keeps future hopes alive