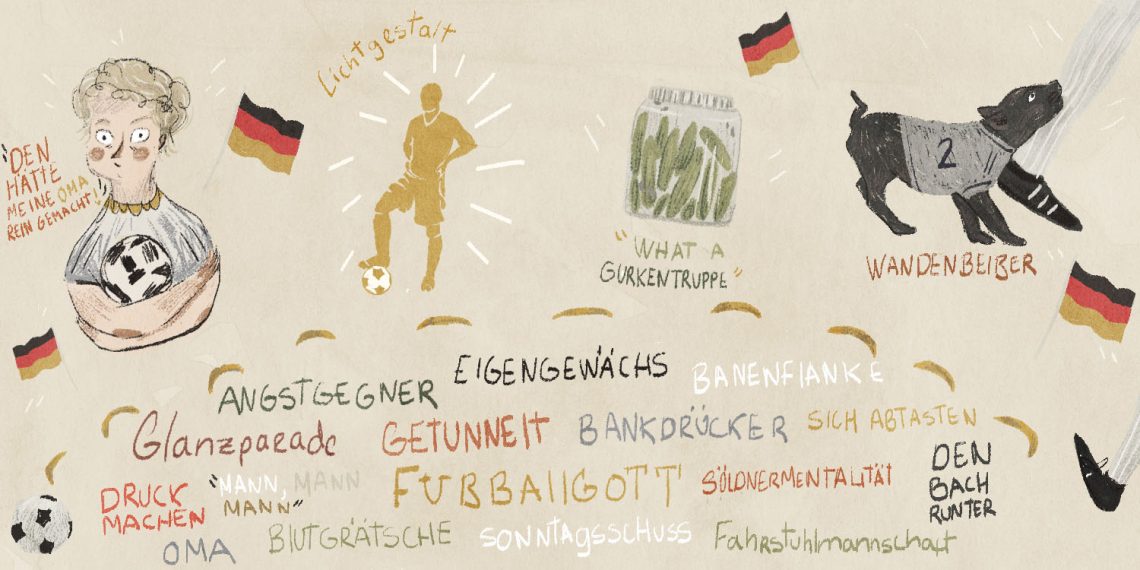 German is a serious language. It’s perfect for philosophy (Kant, Heidegger), made to order for …orders (Betreten verboten! = Do not trespass!) and provides an opportunity to create very long words by just stringing them together (Diözesanvermögensverwaltungsratsvorsitzender = a guy who presides somewhere), but in football German meets a challenge. Not so much on the pitch. Die Mannschaft, the German national team boasting Thomas Müller, Philipp Lahm and Bastian Schweinsteiger was a worthy World Champion. But off the pitch the fast and rapidly changing game isn’t that easily commented in the idiom of Goethe and Schiller. For instance, by the time a commentator has pronounced every syllable of Fallrückzieher the so-called bicycle kick has been replayed five times.

German football slang originates from the days when men in long grey coats and flat caps stood watching their team, hands in their pockets, on a dull and rainy afternoon somewhere in northern Gelsenkirchen. They shook their heads and, taking a cigarette from a neighbour, pronounced the final verdict: “What a Gurkentruppe.” A gherkin troup. Why a very badly playing team is compared to pickled gherkins nobody knows.

Football used to be a family affair in Germany. In many places it still is. But while the younger generation often accompanies their parents to the stadium, an even older generation is already there in the stands, present in the comments made by fans.  Whenever a shot flies wide or a player misses what looked to be an easy ball, somebody will yell: “Den hätte meine Oma rein gemacht!” or “My granny would have scored that!” Oma is the nemesis of every underachieving football player. She would have scored, she would have run (even in a wheelchair), she would have won.

Even if they’re not scared of Oma, the players may be in awe of the opposing team. They may meet their Angstgegner in them, their most feared opponent. And if they don’t manage to land a Befreiungsschlag, a ball (usually a long ball) that extracts them from a difficult situation, or the other team isn’t ashamed to use a Blutgrätsche, a very rough tackle, the game may go den Bach runter, “down the brook”, meaning a costly defeat.

All this may sound as if Germany’s military past still shows in its present, and in a way it does. The tender love, the lyrical praise other languages, mainly the Romantic ones, lavish on the beautiful game, are underrepresented in German. There is work to be done on the pitch; it is not a place for operas to be performed. If a player is nutmegged – originally an exotic spice – in German he’s tunneled. To be getunnelt is the ultimate humiliation and may render a player to the status of Bankdrücker, a player who’s pressing the bench by way of sitting there very often.

There is room for metaphors, though, even in German. A diver, a player who all too easily and dramatically takes flight in the opponent’s box, is said to be doing a Schwalbe, a swallow. And who doesn’t think of that tiny bird, quick as lightning, when Bayern Munich’s Arjen Robben aims at a penalty AGAIN. If a player does this too often, he may be accused of playing den sterbenden Schwan, the dying swan.

All those comments about birds shouldn’t be considered compliments. If animals need be mentioned, Germans prefer dogs. Small and aggressive defenders may be called terriers or Wadenbeißer, the latter referring to a small dog jumping at peoples’ calves to bite. It may not be nice but it’s very effective. Berti Vogts is the epitome of a Wadenbeißer.

The above mentioned Gurkentruppe (remember: gherkin troup) isn’t the only reference you’ll hear to food. If, when crossing, the ball rotates and curves, German commentators notice a Bananenflanke, a banana cross which is more or less the same as a regular cross, but curved. And maybe yellow.

Most terms and phrases don’t sound romantic, but that doesn’t mean there’s no love or passion in the hearts of German fans. If a player consistently delivers, he will be promoted to Fußballgott, “football god”. Only one player ever reached the level of a Lichtgestalt, though, which means more or less a glorious figure, a word that sounds more more like Heidegger than any other in football. It’s the term reserved for Franz Beckenbauer and indeed the famous German philosopher and author of “Sein und Zeit”, in his days a left winger at FC Messkirch, was a great admirer of Beckenbauer.

At times ordinary players will get to glow a little, too. A goalkeeper who blocks a dangerous shot may be told he has done a Glanzparade, a “shining save”. If he didn’t do a Glanzparade and the attacker scored, maybe to his own surprise, the goalscorer performed a Sonntagsschuss, a shot that only goes in on Sundays, when there is a little divine help behind it.

Nowadays most Bundesliga teams look like the United Nations. Mainz 05 has players from 14 different nations and not one of them is an Eigengewächs, a player who came from the club’s own academy. Homegrown players used to be the ones fans could most easily identify with. More and more, though, we see players who come from anywhere, who wear the shirt for some years and then move on to other clubs. Fans who perceive a lack of loyalty and devotion might assume these players have a Söldnermentalität, the mentality of a mercenary. In similar fashion, modern globalised football means it’s now rare that a player’s career comes to fruition in the same region where he grew up. Without their best talents the smaller clubs may become a Fahrstuhlmannschaft, a team that goes up and down between the first and second leagues, like in an elevator.

Most of the words mentioned above are nouns. To state a fact, describe a situation, depict a relationship is where the German language is at its best. But when it comes to verbs, when it’s time to describe actions, German football relies on many of the same words used in English. German players shoot and block and tackle and cross and parry like anyone else. In many situations, both in everyday language and in football terms, English words are mixed with German ones. A commentator may speak of a hartes tackling or call an experienced striker an erfahrener goalgetter.

If teams are very creative, they “tie a knot in an opponent’s legs” (einen Knoten in die Beine spielen) or the teams “touch one another” (sich abtasten). Normally this kind of play doesn’t involve much actual touching. Germans like to keep their distance. But even if a team presses forward, in German they need a noun to “make pressure” (Druck machen). Verbs are alright, but German needs a noun to know where we stand.

German is a static language, based on nouns and descriptions what things are rather than what they do.  There were times when a sense of law and order and the statics of the game has secured us the World Cup, but in these modern days different styles and mentalities add to a team’s character and charisma. While the old words are still in use, the players they apply to are very different. In November 2016 the leading goal scorers in Bundesliga represent Gabon and Bosnia, France and Poland. There sometimes just are no words to describe what they do on the pitch. Where other languages can indulge in flowery description, the German fan often is reduced to a repeated exclamation of “Mann, Mann, Mann”. It might literally mean “man,” but in footballing terms it means the highest praise.

A maledetta from the trequartista: deciphering Italian football