We are still under quarantine, and it’s time for the penultimate episode of 21 Thunder! In episode seven (“Together We Part”), we are in for a wild ride as all of the plot points reach their climax.

Jessie, Kirsten, and Megan jump almost directly into commentary for this episode. Well, after a short detour about a picture of a cyclist with goats.

“Together We Part” begins with drama between Junior and Fatima as she reveals a past relationship with Bamba, and the fast pace only continues from there. Our favorite U21 side is going up against London Crown FC in the InterCon Cup, which are two examples of the creative naming in this show universe.

Davey is reeling from his ill-advised drunken vlogging/instagram live where he insulted Ana, and she demands he go to London before he will get paid. Lara tries to pull him into her match-fixing scheme by promising to fix his financial mess.

In a shock move, Albert Rocas resigns as head coach of the U21 team, leaving the position open for Christy Cook to be the first female head coach in MLS (though we wonder if it being the U21 team still counts).

Emma and Nolan seem to be at a breaking point as she ponders her move to Trinity College in Dublin, while she finally finds out the secret he has been hiding all season. She tries to support him, but Nolan continues to try to protect her (in various ill-advised ways).

Marie Tremblay and Stefan Arnaud (Big Snacks) also face the end of their relationship as the team is promoting her marriage to her fiancee from the first team. Marie is upset with how all her plans were changed to fit the extravaganza planned by the team, and she ends up running off to City Hall.

We catch up with Alex in the worst way, as Big Snacks shows a video compilation of him essentially breaking down during a game. Emma wants to comfort her friend, but where will they end up?

Listen to our episode below through Megaphone, or find us on your favorite podcast app (we are under “All for XI”)!

Want your own Unusual Efforts merch? It’s on sale right now through our Threadless shop, so check it out for your own tank top, mug, or shower curtain.

Would you like to directly contribute to Unusual Efforts as well as get a ton of awesome content? Join our Patreon, where we have special levels for custom photoshops, exclusive articles written by Ritika, and minisodes! 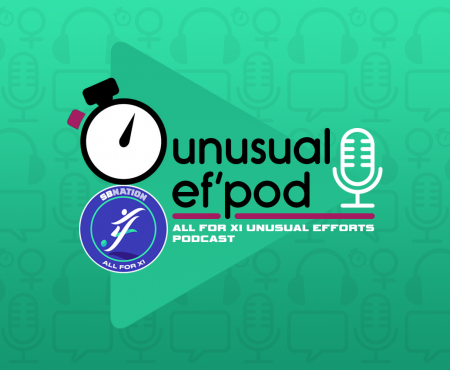 Unusual Ef’Pod episode 39: The Not So Special One With Special Guests